Chris is a self-employed builder. He takes a tablet of omeprazole and some gaviscon every evening to prevent heartburn, but otherwise has been healthy most of his life, and is looking forward to retiring in a couple of years – he is now sixty three.  But last week was awful. On Monday morning he went to work as usual – his company is converting a large house into apartments. When he arrived at work he felt suddenly unwell and vomited up his breakfast of toast and jam. 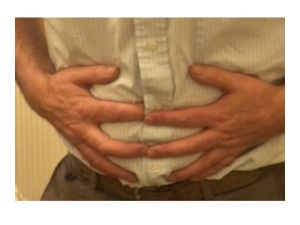 Then he started to get really bad cramping pains in his belly, and had to rush to the toilet to produce large amounts of diarrhoea. Luckily they had put a new bathroom into the conversion a few days before. He ‘phoned his wife, who came and brought him home.  He continued to feel really unwell with completely liquid diarrhoea every two or three hours, including through the night.  Sometimes the diarrhoea contained dark red blood.  His wife wanted to call the doctor, but Chris hates making a fuss.

After two days the doctor was called and found that Chris was really not very well. His pulse was fast and his blood pressure was a bit on the low side. He strongly suggested that it would be best for him to go to hospital for a drip, but Chris was not at all keen.  He agreed to drink some oral rehydration made up from sachets the doctor had left him, and gave a blood sample. When the GP ‘phoned a few hours later, Chris’s wife told him that he had not been able to keep the salt solution down.

“I’m calling an ambulance – just persuade him that he has to go” the GP said.

When he arrived at the emergency department we had the results of the blood sample – his plasma creatinine was over twice the upper limit of normal – 260 micromoles/litre. His haemoglobin was a bit low- 105g/l and his CRP was very high at 180.

The ED department doctors had persuaded him that he had to be admitted and wrote “infective gastroenteritis and AKI” on the clerking form. AKI means acute kidney injury. I don’t like the blanket use of this recently fashionable term for any sudden increase in creatinine or drop in glomerular filtration rate.  In this case Chris’s kidneys are not injured – they are doing their job very well, under difficult circumstances. By stopping urine output they are saving his life – if they had carried on producing the normal amount of urine despite severe dehydration Chris would most likely be dead.  When an athlete runs 100metres and is very short of breath we don’t say he has acute lung injury – his respiratory system is responding appropriately to physiological demand – as were Chris’s kidneys.

He was put into a side-room on the acute medicine unit and his intravenous fluid was continued.  His pulse, blood pressure and urine output were monitored.  A couple of days later the nausea and abdominal pains had settled, his diarrhoea had reduced to twice a day, and he was starting to feel hungry again.   The microbiology lab ‘phoned to tell us that they had found Campylobacter in the pot of blood-stained, watery liquid labelled as a stool sample we sent when he was admitted.

Where did the Campylobacter come from, and why did his wife not get it?

Campylobacter jejuni is a spiral-shaped bacterium and a relative of Helicobacter pylori which I have talked about previously (vomiting blood and sweetbreads). In the UK raw or undercooked chicken is the most likely source. It does not cause disease in the chickens, but is a commensal organism – amazingly about 60% of chickens reared in this country contain campylobacter in their intestines. Chris likes to cook, and a couple of days before he became ill had prepared one of his favourite meals – fried chicken and rice. He admits he might not have been as careful as he should about washing his hands and cleaning the chopping board after jointing the chicken – he will be in the future.

Chris was particularly at risk because he was taking omeprazole, which reduces stomach acidity. The low pH in our stomach is important in killing nasty, pathogenic germs in food we eat and stopping them getting into our intestines. Nitrate secreted into saliva is also important – it is converted to nitrite on the surface of our tongue by bacteria which normally live there. This nitrite is swallowed and reacts with stomach acid to produce nitric oxide – which is toxic to many germs including campylobacter.

Stomach acid also has other uses. In many parts of the world people are lactose intolerant and get a lot of their calcium from eating bones rather than dairy products. I am told that when chicken is eaten in Africa and China, the smaller bones are crunched and swallowed. Stomach acid is necessary to dissolve bones and release the calcium.

The next question is why do some bacteria, if they get past the stomach’s defences, cause vomiting and diarrhoea, when our colon is full of bacteria all the time? Why do our resident colonic bacteria not stimulate an inflammatory response?

There are two main reasons – invasiveness and bacterial toxins. Like the stomach, the lining of the small and large bowel is covered with a layer of mucus, secreted by goblet cells. Our resident bacteria are well-behaved citizens and do not try to invade across the mucus layer into the gut epithelial cells. Mild incursions are allowed, but if they get as far as the base of the epithelial cells, they will trigger an alarm.  These epithelial cells have toll-like receptors on the basal and lateral surfaces which, when triggered, will cause the police, in the form of neutrophils, to be called to the scene. The neutrophils will hunt down and digest these wrong-doers, causing a bit of havoc in the process. That is what inflammation is – the action of our immune system to destroy threatening pathogens. Campylobacter is not well-behaved, but attacks gut epithelial cells to produce inflammation. The result is leaking out of large amounts of fluid from the gut wall and stimulation of intestinal smooth muscle. Together these caused Chris’s abdominal cramps and diarrhoea. The inflammation can sometimes be so severe, as with Chris, to cause bleeding from the inflamed gut mucosa – bloody diarrhoea is known as dysentery. Some unfortunate patients with ulcerative colitis have inflammation and diarrhoea when there is no obvious pathogen – either something has gone wrong with the police force (immune system), or there is a pathogen which we have not yet found.

Many germs which cause gastroenteritis, including campylobacter, produce a bacterial toxin. I warn our students to be careful of using the word toxin, unless describing something nasty made by a bacterium. At least we should know the chemical name of the toxin. Alternative medicine therapists use the word toxin all the time, but I’m not usually sure what they are talking about, and you have probably guessed I’m not a fan.

The most dramatic effect of a toxin-producing organism is seen in cholera. This organism makes a toxin that interferes with the normal mechanism for absorbing water from the gut. Typically, patients with cholera produce more than ten litres a day of very watery diarrhoea, and if not given lots of oral or intravenous fluids will die from dehydration. There is an interesting story about sporadic cholera outbreaks happening in the 1970s, apparently at random in communities with good sanitary facilities. It was found that these occurred under the flight-path of aeroplanes flying from cholera-endemic areas. The planes were discharging the contents of their sewage waste tanks in mid-air at 30,000 feet to reduce weight. The cholera organisms were surviving the drop and causing mini-outbreaks of disease. The airplanes don’t do that any more.

Another toxin-producing bacterium we commonly see in hospitals is Clostridium difficile diarrhoea. It used to be very common in frail, elderly patients given broad-spectrum antibiotics. C difficile would frequently kill these patients in a thoroughly depressing, undignified manner. It is called C. difficile because, when originally identified as the cause of pseudomembranous colitis, it was very difficult to grow.  This was because it is an obligate anaerobe. That means even very small amounts of oxygen inhibit its growth, but now we know this we can easily grow it in the lab. We can also identify the toxin, and detect C.difficile DNA using rapid PCR testing. We now see much less C.difficile diarrhoea – due to a combination of obsessional hand-washing and more careful use of antibiotics. It is worth knowing that the alcohol hand rubs do not kill C.difficile spores – when the lab are trying to isolate C.difficile, the first stage is to flood the specimen with absolute alcohol to kill off all the other bacteria. Washing with soap and water works by removing spores from the hands, not by killing them. Clostridium is closely related to anthrax, another nasty organism which makes almost indestructible spores. Clostridium botulinum also produces a very unpleasant toxin which can cause death by paralysis – interestingly nitrite is added to help preserve meat and prevent the growth of C.botulinum organisms.

This week’s food link is red kidney beans. They are fine if they are cooked in chilli-con-carne. But if they are eaten uncooked they can produce a nasty illness which resembles bacterial gastroenteritis – vomiting, diarrhoea and abdominal pain. It usually happens only 2-3 hours after eating raw or undercooked beans. Bacterial gastroenteritis typically causes symptoms between one and two days after eating infected food. Red kidney beans contain a toxin known as phytohaemaglutinin. This is destroyed by boiling the beans for at least 10 minutes. Undercooking (such as in a slow cooker which does not reach boiling point) can actually increase the amount of toxin.

Phytohaemaglutinin is one of a family of proteins, called lectins,  produced by plants which selectively bind sugar molecules. The notorious spy-poison ricin, derived from castor oil seeds is a lectin. These proteins have many uses in medical research and in the past were used to identify the sugar molecules on red blood cells allowing us to type blood into A,B and O groups. Binding sugar molecules on the intestinal epithelial cells triggers increased secretion of fluid and smooth muscle contraction in a similar way to invasive bacterial or viral pathogens, but the illness following eating raw kidney beans normally only lasts a few hours, rather than days. But I would still encourage you to cook your beans well.